The bad part of going on vacation is coming back. I love North Carolina; the climate is 100% better than Ohio (sorry Buckeyes) and New Jersey (I am a Yankee at heart, but I wouldn’t move back there), but when spring comes, EVERYTHING is covered in a cloud of pollen. I guess they don’t call Raleigh the City of Oaks without reason, but if you have allergies, it’s murder. And when you compound the allergies with asthma…?

When we stepped off the plane in Las Vegas my lungs sighed with relief. The temperature was a comfortable 70°F; but even when it reached 90°F, it wasn’t bad because there was no humidity; and no pollen. It was heaven.

Then we came back. Again, I love North Carolina. But I took one deep, pollen-filled breath and my lungs have been cursing me since. I can’t help but cough, which earns me really evil looks from people around me, like I’m Patient Zero carrying a new strain of the bubonic plague. I’m on a regime of inhalers, allergy medications and now steroids – ah drugs.

I digress though. Las Vegas was awesome; and gambling and advertisements for prostitution aside, everyone over 21 should visit it at once in their lifetime. My husband and I took in the sites most of the time we were there and we still didn’t see everything there was to see. Most of the locals we met were friendly (definitely friendly than some of the tourists we talked to). The food was great and there were plenty of places to spend your money (the funds you brought with you and the ones you won at the casinos) which were EVERYWHERE! From the time you stepped off the plane to the time you left, there were opportunities to gamble everywhere. It was quite a vacation and I look forward to going back, but despite their claims that Las Vegas is a family place, I would advise everyone to leave your kids at home. It is NOT a family destination (besides, how you can enjoy Sin City if your kids are watching…kidding…maybe).

Below are some photos we took. I’ll be posting my Six Sentences for Sunday after this and then we’ll be back on schedule…at least as soon as I can breathe again, anyway.

The hotel we stayed at – The Las Vegas Hotel and Casino. It was about a mile off the Strip, but still close enough to everything to make it a worthwhile stay.

Our view from the fifteenth floor of the LVH. Note the mountains in the background – we were surrounded by them. And that is not real grass on the golf course below. 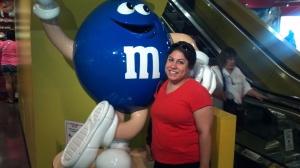 Yes, that’s me at M&M World, doing the ‘tourist’ thing and posing with the big, blue M&M. 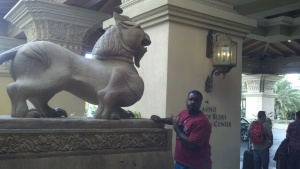 And this is my husband, doing the ‘tourist’ thing at the Luxor, another theme hotel (the one with the pyramid). 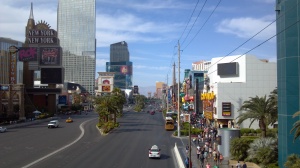 View of the Strip from New York New York…

Complete with a twelve-foot Statue of Liberty made out of jelly beans. Ingenious.

And while we’re on the topic of food, this was my breakfast. That’s a chocolate-covered strawberry, the size of a peach. I don’t know where they imported it from, but it was awesome…

As was my cheesecake dessert from Serendipity, at Caesar’s Palace. To get a sense of the portion, look at the glass behind it. The ‘piece’ was about the size of one cake. It was huge. I could only eat a tiny fraction of it. 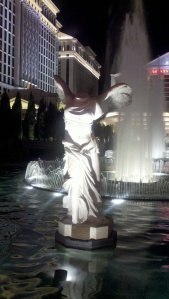 Last one. We were fortunate to see the dancing fountains at the Bellagio, but there were many other fountains in the city to enjoy, including this one with Nike, the winged Goddess of Victory. It was a spectacular sight – all of it.