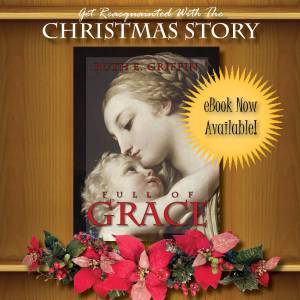 Greetings my faithful readers. Full of Grace is now available as an eBook. You can get your copy from Amazon or Smashwords for only 99c. The paperback version will follow soon.

In the meantime, I will continue posting the excerpts from the book, until Christmas. Enjoy.

“So how are you and Mary doing?” Heli asks pointedly. No point in

Turning his eyes back to the carvings in front of him, Joseph says, “We’re good.”

Heli watches him, recognizing the response for what it was – a brave front.

“I’ve heard the talk, Joseph, so I know you and Mary are aware of it. You don’t have to pretend for me. This has to be difficult for you both.”

Joseph locks eyes with him, but seems almost uncertain to respond. Finally, he says, “Can I ask you something?”

“How did you know you would be a good father to Mary and Nathan and the girls?”

Heli considers the question for a moment.

“Honestly, you don’t know that until the child is born and you behold them for the first time. Whatever you felt earlier, what questions you had before, it’s at that moment you know you would do anything in the world for them.”

“Joseph, you are a good man,” Heli says, trying to encourage him.

“The same way you will when it is your flesh and blood.”

At that, Joseph stops. He continues to hold to eye contact with Heli, but the older man can tell there is something else, something more eating away at his soul.

“I love your daughter, but…when I look at her, I don’t see a wife or mother, only what is out of my reach. She is patient and loving and well-equipped for this calling, while I…I am not. To be honest, I fear touching her or beholding her in anyway but revered.”

Heli’s heart breaks for his son-in-law. He had known him since he was a boy, apprenticed to his father in this very shop. In the months since Mary returned from Hebron, Joseph had endeared himself to the family. Admittedly, yes for protecting her, but also for his generous heart and even-keeled demeanor. Surely he knew what a blessing he was…  But as Joseph continues to gaze at him, searching for assurance and reason, Heli realizes he doesn’t know.

“Son, it’s not just Mary who is favored; you were just as chosen as she was. Understand that a husband and wife are no longer two people in the eyes of G-d, but one unit. He didn’t choose Mary and then chose you. He chose you both. He blessed you both. He favored you both. And truthfully, she needs you as much as you need her. I’ll tell you, I could not survive without my Anna. I was incomplete until I met her. She is my other half, she is my better half and I know you feel the same for Mary. But what G-d has asked of her, he asked of you and you are both in this together. We are all in this together – you, Mary, Anna, me and Miriam.”

Joseph says nothing. There is still doubt in his face, but now it’s accompanied by a sliver of hope.

“Talk to Mary,” Heli admonishes him. “You may find she’s more human than you behold her to be.”

After a long moment, Joseph finally says, “I will.”