Thanks for stopping by for another week of Weekend Writing Warriors. Today’s post comes from my new book, Speak Tenderly To Her. Tory’s words have changed how he sees Isobel, taking him through the two weeks he agreed to let her stay, but what happens when the time is up and Isobel has nowhere to go?

The synopsis is posted below. As always, I love your comments and feedback. 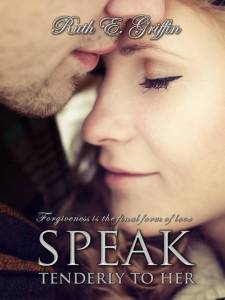 Though she moved about getting the food to plates, she kept her head down and avoided eye contact, another reminder of why he should speak tenderly to her.

He cleared his throat and said, “Nancy Syas from the church called last night.”

Isobel stopped moving and looked up at him expectantly.

“She said that there were no beds available,” he began and paused to take a sip of coffee, unintentionally building the suspense. He watched as her shoulders slumped and her countenance fell, her eyes scanning his, asking the unspoken question of what she would do now. Well, he would answer that for her: “I told her you could stay here.”

Her expression didn’t change; she studied his face, perhaps looking for the punchline that ended with ‘just joking’. But he wasn’t joking: even after several hours to reconsider his decision—a decision his mother and friends would certainly give him hell about—he knew he was okay with Isobel staying as long as she needed to.

* * *
Synopsis: Isobel has spent her life running from the mistakes of her past, but she is ready to settle down now. Unfortunately second chances aren’t easy to come by, especially when you’ve hurt the person you love the most and Isobel did that four years ago, when she walked out on her husband Tory.Thanks to the machinations of their pastor though, Isobel finds herself back under the same roof as Tory. The familiarity has her yearning for what used to be, but she knows there’s no way he’s going to accept the truth of her return, much less love her again. And she’s right: when Tory is confronted with all the pain and emotions he thought he’d left behind, he refuses to let go of his bitterness. But as he speaks tenderly to her at their pastor’s behest, the love he once felt for her begins to surface and fill his heart.Now, as the two struggle with forgiving and being forgiven, they find that reconciliation is possible – but only if they look beyond what was and deal with the trouble that’s followed Isobel back into Tory’s arms.