Happy Sunday! Welcome to another week of Weekend Writing Warriors. Today’s snippet comes from my new book, Speak Tenderly To Her. Though all is going well with Isobel, Tory finds that things are not so well with Rebecca. As always, I love your comments and feedback. The synopsis is below.

“Tory, listen, you are a nice guy, you really are: you’re caring and giving and loyal – any woman would count herself lucky to have your heart…but only one woman does; and I don’t know what the situation is between you and your ex, but I do know that Isobel left a hole in your heart that I would never be able to fill and I would rather let you go now before I allow myself to believe I could mean that much to you.”

He could hear the sorrow in her voice as she spoke and hated that she even had to think the words. He squeezed her hand and pulled her to him, but she resisted, pushing against his chest just hard enough to show she meant what she said.

“It’s better this way,” she said, her eyes shimmery; she blinked a couple of times and offered him a sad smile. “Goodbye, Tory.”

Pulling her hand free, Rebecca turned away from him and walked out of his office, leaving Tory standing alone and miserable—no different than how she found him. After the realization of the moment hit him, Tory found his way back to his chair and sat back, closing his eyes again and wishing he was the one that could run away. 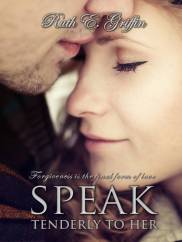 spent her life running from the mistakes of her past, but she is ready to settle down now. Unfortunately second chances aren’t easy to come by, especially when you’ve hurt the person you love the most and Isobel did that four years ago, when she walked out on her husband Tory.

Thanks to the machinations of their pastor though, Isobel finds herself back under the same roof as Tory. The familiarity has her yearning for what used to be, but she knows there’s no way he’s going to accept the truth of her return, much less love her again. And she’s right: when Tory is confronted with all the pain and emotions he thought he’d left behind, he refuses to let go of his bitterness. But as he speaks tenderly to her at their pastor’s behest, the love he once felt for her begins to surface and fill his heart.

Now, as the two struggle with forgiving and being forgiven, they find that reconciliation is possible – but only if they look beyond what was and deal with the trouble that’s followed Isobel back into Tory’s arms.