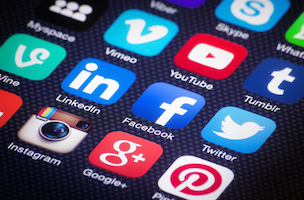 My daughters each have multiple Instagram accounts: one as their main account, one for business, and one for being silly. I follow all of them (this has been my rule since they started on social media) and while I understand the need for a business account when you’re trying to push a product or service, I really don’t get the thought process behind the last one. For being silly? I thought honestly that’s what the main account was for, to be yourself and if you’re silly, then you have a ready-made platform. I’m not sure if it’s working for them, but they insist it is – which brings me to my dilemma: how many social media accounts is too many?

I have multiple accounts on multiple platforms, and quite frankly, it’s exhausting trying to keep up with all of them. But the thing here is that they are for different projects, or businesses. So I have a main author account on Twitter, Facebook and Twitter. But now that I also have my publishing business, I must also have different accounts for that. BUT I am also getting ready to launch a project which will eventually grow into its own entity/organization – so I guess that means I have to open account for that.

I’ve been seriously debating this. Because if I am the mind behind the author, the publisher and the project, then I am the person being followed…right? Because it’s my thoughts, pictures and quotes my audience is ascribing to. Whether I’m being witty (I’m usually not), silly (eh…), political (almost hard not to be), sarcastic (sometimes), informational (I like information) or just plain me (100% of the time).

But the thing is, eventually my plan is for these ventures to grow into organizations. And if that’s the case, I can’t run all of them, all of the time. So that means I MUST get separate accounts.

But I’m also not there yet.

But I will be. And when that day comes, I should have a ready-made audience.

And while we’re debating this, I’ll also need to decide where to reach my audience:

Ugh. See what I mean? There is lots to unpack and think about here, and unfortunately, I’m not any closer to an answer than I was when I started. Or I am and I just don’t want to admit it. I do have a project launching next week and I will be changing up this website, which also means I’ll have to create a new website for that project as well. Ugh, it never ends.